The China Automobile Dealers Association recently released data. In August, a total of 1,498,200 second-hand cars were traded across the country, an increase of 2.69% from the previous month, and the transaction amount was 97.110 billion yuan. From January to August, the second-hand car transaction volume was 11.39115 million, a year-on-year increase of 40.38%. , An increase of 22.84% over the same period in 2019.

The Distribution Association stated that the lack of “cores” in the new car market still needs to be alleviated. The inventory of many brands has dropped to the lowest point in history. In the market, the main source of used cars is still the replacement of new cars in 4S stores. Constrained by the "difficult delivery" of new cars, replacement was also suppressed this month. Therefore, the prices of used car terminals generally rose in September.

In terms of the preservation rate of used cars, the price increase of small cars in September was higher than the overall price, and the “supply shortage of products” has become more serious. Buyers at the C-end have relaxed their requirements on the size and performance of vehicles, and the need for travel has become a purchase again The main motivation for used cars. 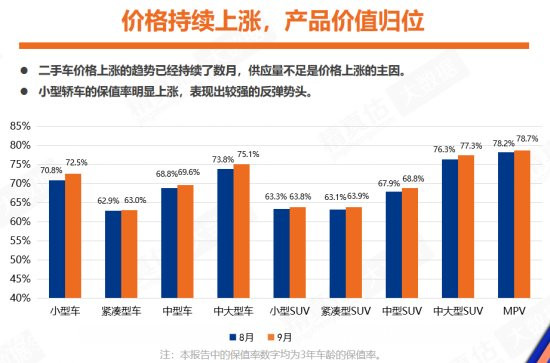 Luxury brand second-hand cars have basically maintained a price increase trend. Only Infiniti and Tesla have slightly decreased, while BBA has the largest increase, which includes factors that increase the guide price of new cars, such as the Audi Q3. In addition, the activity of "distributing fares to buy back second-hand cars" carried out by dealers in some regions of the BBA has also had an impact on the expectations of second-hand car prices. 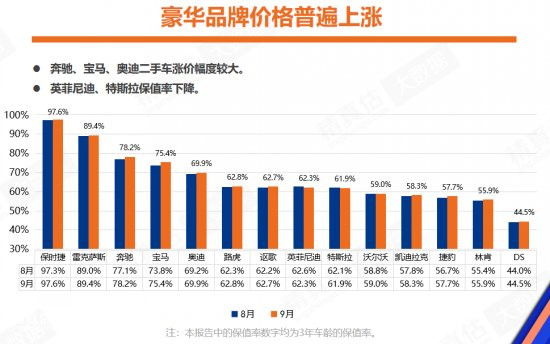 Among the mainstream joint venture brands, only the Honda brand's retention rate declined slightly. According to the analysis by the Distribution Association, it was mainly affected by the price cuts of new UR-V vehicles, indicating that Honda's brand power still has a significant gap with luxury brands of more than 250,000 yuan. It is also worth noting that after Hyundai brands actively adjusted production capacity and contracted channels, the balance of supply and demand was basically achieved. The quality, reliability, and fuel consumption of second-hand cars are also at the upstream level of the industry. Coupled with the Hyundai Skutu MPV being launched at the end of September, the attention has been increased, and the value retention rate has rebounded. 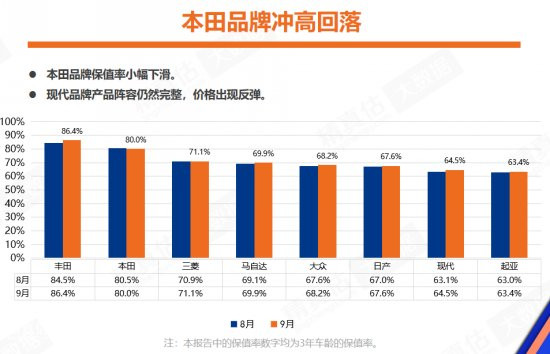 In terms of independent brands, SAIC's dual-brand strategy for passenger cars has achieved results. MG and Roewe have entered the top 15 independent brands, and they have risen month by month. The different appearance and positioning of the same products can bring more choices to consumers. Under the background of the current stock market, accurate positioning is easier for consumers to accept and recognize. This strategy can also help car companies quickly devour the market. In addition, the Trumpchi brand value preservation rate has increased significantly, mainly driven by the hot sales of the MPV model Trumpchi M8. 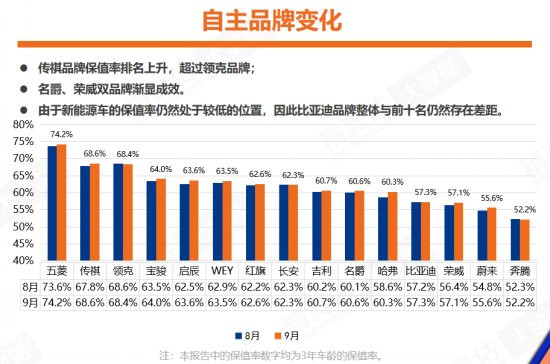 In terms of new energy vehicles, the New Energy Vehicle Conference held in September revealed the country's direction of advocating carbon peaking, carbon neutrality, and new energy vehicles, so the value retention rate of new energy vehicles has increased. In addition, the Distribution Association believes that with the rapid renewal of pure electric products of joint venture brands, the value retention rate of electric vehicles may be further improved: the new generation of products represented by Volkswagen ID.4 is fundamentally different from the existing second-hand vehicles in the market. . 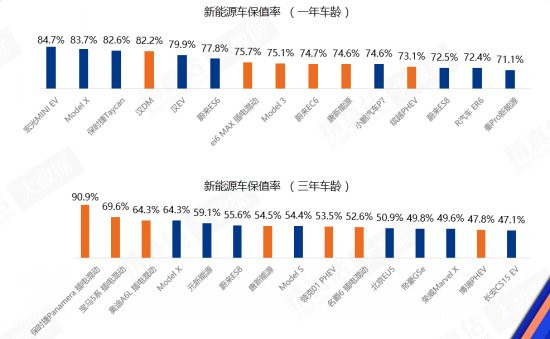 In September, Hongguang MINI EV's one-year hedging rate reached the first place, at 84.7%, and the rankings of Han DM and Han EV also rose. In addition, as a new brand of R car ER6, its value retention rate reached the top 15 within one year after its launch, reaching 72.4%, indicating that its new positioning strategy has been quickly recognized by users.