As of last Sunday, local time, it had been six days since the strike of South Korean truck drivers, but there is still no sign of easing. At present, the transportation of goods in South Korea's industrial centers and major ports has been paralyzed. South Korea's transport ministry said it had held a third round of talks with truck drivers' union leaders for more than 10 hours on Saturday to urge drivers to return to work, but the two sides had not yet reached an agreement.

Earlier, according to South Korea's "Dong-A Ilbo" report, the "Cargo Joint Headquarters" of the South Korean Freight Union launched a general strike on June 7, which blocked logistics and transportation in various places. According to the report, this is the first large-scale strike after the new government came to power. The government emphasizes that it will take a stern response in accordance with principles, and it is expected that the strike will be prolonged. 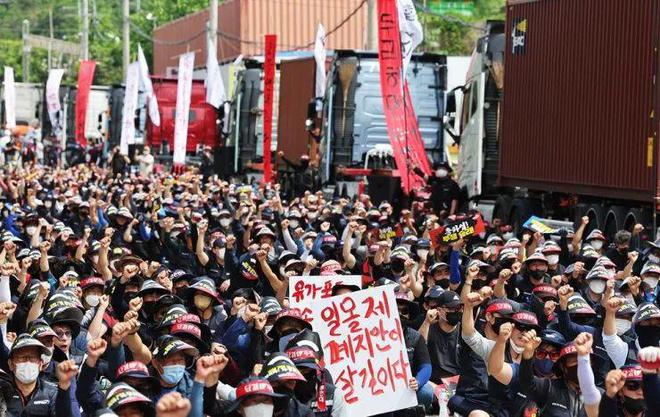 The strike started at 0:00 that day, demanding the government to abolish the safe shipping deadline system. According to the South Korean Ministry of Land, Infrastructure and Transport, more than 9,000 people participated in the rally, accounting for about 40% of union members. It is reported that due to the strike, the logistics of cement and iron factories in various places have been blocked, and the national cement shipments in South Korea have been reduced to about 10% of the usual level. Cement shipments stopped, and concrete companies took a hit. The cement stocks stored by the major concrete companies in the capital area are only 1-2 days, and the longest is only 2-3 days.

It is understood that the reason for the strike by South Korean truckers is due to the high fuel costs, which has caused difficulties in the transportation of goods. The head of the Korea Trucking Union said that some large freight drivers have to bear an additional 3 million won (about 15,600 yuan) in fuel costs a month, and for some drivers, these costs have reached the level of their wages.

At the beginning of the epidemic in 2020, the South Korean government established a safe truck freight system and set a minimum wage to ensure the work of truck drivers. But this system will end at the end of December this year. They are worried that the end of this system will increase the pressure on their lives, so they hope that this series of related policies and systems can be extended. At the same time, the truck workers union calls for not currently covered by the safety rate. The industry's road transport economy, employers and transport companies, have agreed to raise wage rates to deal with the cost of living in the crisis.

It is worth noting that South Korea is one of the world's major suppliers of semiconductors, smartphones, automobiles, batteries, and electronic products. The strike has further exacerbated the uncertainty of the global supply chain.

It is said that the Hyundai Ulsan plant had been operating at almost full capacity before the strike started last week, but the operating rate of the plant fell to 50%-60% last Thursday.

Hyundai acknowledged that the strike had disrupted production, but declined to provide details on the exact impact. A Hyundai Motor spokesman told the media on Friday: "We have had some disruptions in our production due to the strike of truck drivers, and we hope that production can return to normal as soon as possible." The output is about 6000 vehicles.

According to a source from the Hyundai Motor Union, Hyundai Motor's Ulsan plant usually has a 10-minute break every two hours of work, but due to a lack of spare parts, some assembly line workers only worked for about 30 minutes and then had to take a few hours off.

The paralysis of South Korean ports will seriously affect various domestic industrial chains and supply chains. At present, the port is paralyzed and suspended, and the transportation time of container cargo has also become an unknown. The "Dong-A Ilbo" said that the shipment of products from steel companies such as Posco and Hyundai Steel was interrupted. In addition, since steel has a greater impact on industries such as shipbuilding, automobiles, and home appliances, there are concerns that there will be a domino effect if the situation continues.

In response to the first nationwide strike in the first month after taking office, South Korean President Yoon Sek-yue said that the government does not intend to intervene, and hopes that both labor and management will solve the problem through dialogue and coordination. Kim Ki-chan, a professor of business administration at the Catholic University of Korea, said the problem is difficult to solve, especially if the new president is from a conservative party that focuses on economic growth rather than social welfare.

It could take months for the government and unions to resolve the issue.