In the early stages of the development of smart electric vehicles, financing and qualifications became a problem for all employees. Sailin, Byton, and Future failed to survive the "lack of money" crisis. In the midfield battle, financing and qualifications have basically been resolved. Talents, business circles, and users have become the focus of the current stage of the competition. New top forces such as "Wei Xiaoli" have begun to take shape, and the newly entered Lantu, Zhiji, Jikrypton, Xiaomi, Didi, etc. will face the increasingly high rents in the business district, the increasingly scarce high-end talents, and the more intelligent users, the threshold and cost will be higher, and the probability of being eliminated will be higher. Big. 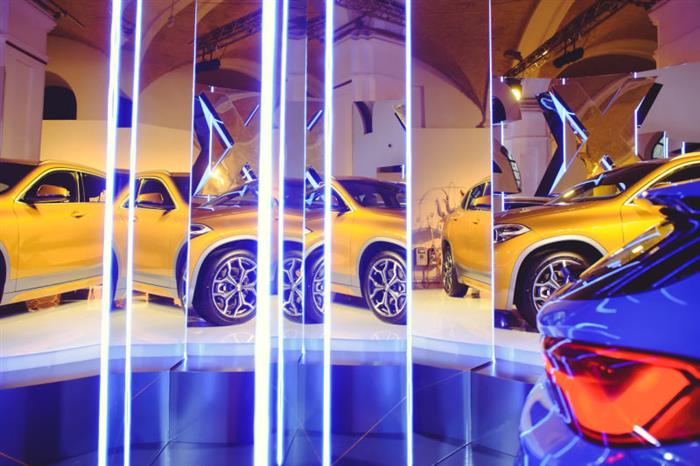 After Tesla chose to open China's first experience center in Beijing Parkview Green in 2013, many smart electric vehicle brands such as Polestar and Xiaopeng have also chosen to station here. In Beijing’s other typical business district, the Blue Harbor Shopping Center, it is almost a gathering place for electric vehicles. Brands such as Weilai, Ideal, Jihu, Gaohe, and Tianji have opened experience stores in this business district. Recently, Ford’s electric The automobile brand Mustang also came with Mach-E.

After experiencing initial financing difficulties and failing to obtain the qualifications, smart electric vehicles entered the midfield battle, and talents, business circles and users became the focus of competition among major smart electric vehicle brands. Weilai, Xiaopeng, and Ideal in the first echelon have played steadily in the past few years and have certain resource advantages; but the newly entered brands such as Lantu, Zhiji, Jikrypton have not accumulated talents and users, how to deal with the era of smart electric Midfield war?

In the new round of competition for business circles, the first echelon of "Wei Xiaoli" has gained "innate advantage" after years of accumulation. Public data shows that Weilai currently has 23 Weilai Centers and 203 Weilai Spaces. This year, it plans to add 20 Weilai Centers and 120 Weilai Spaces, increasing the total number of stores to 366, covering various cities in China.

Although ideal is temporarily behind, it is catching up. As of January 31, 2021, Ideal Auto has 60 retail centers covering 47 cities across the country. Ideal plans to expand to 200 stores this year to 100 cities. Li Xiang, the founder of Ideal Auto, once revealed: “If there is an ideal car store in a city, the market share will vary by as much as 8 times.” After realizing the importance of offline outlets, Ideal last year increased its target of offline stores from 20 stores. Adjusted to 60.

The Ford electric brand Mustang, which just launched its first model on the eve of the Shanghai Auto Show this year, has built 9 city stores across the country in just a few months. "The plan to open 23 city stores across the country has been nearly half completed this year, and it has now covered eastern and northern China. , South China, Southwest and other core new energy user areas.” Ford’s electric vehicle marketing officer revealed that “The opening of stores in five cities not only accelerates the launch of Ford Mustang Mach-E’s exclusive direct sales network, but also further promotes Ford’s electrification and intelligence strategy. "

While    business districts and shopping malls have a huge flow of people, land prices are also very expensive, and many smart electric vehicle brands are overwhelmed. In 2018, Qiantu Automobile, the first to obtain the "dual qualification" for new energy vehicles, entered Beijing Sanlitun North Street. As the first experience store, it was once a crowded market. At the end of last year, Qiantu Motor moved out of Sanlitun due to a broken chain of funds, employees asking for salaries, and difficulty in producing new cars. Today, Xiaopeng Motors has taken over the site and opened the country's first flagship experience center. It can be described as "but when you see the newcomer smile, the old one cries when you hear it."

A staff member of the Wenzhou Shopping Mall Leasing Department told reporters: “The current long-term rental rent for new forces entering our mall is 800-900 yuan/square meter per month, excluding property fees and promotion fees. The short-term package price is higher, depending on the difference. Location depends." Wenzhou is a second-tier city, and shopping mall rent is already expensive, and in a first-tier city like Beijing, the monthly rent for opening an experience store in Sanlitun is 1,500 yuan/square meter.

Statistics from the China Automobile Dealers Association show that in 2020, the number of dealers nationwide withdrew from the network reached 3,098, far higher than the 2,263 new outlets. In terms of categories, the new energy vehicle dealer network has increased by 479, which is more than 6 times the number of exits. Among them, new energy vehicle brand urban exhibition halls account for about 65%, and the location is more focused on shopping malls or office buildings with dense crowds.

Although the rent is expensive, most smart electric vehicle brands also choose to open sales and experience stores in crowded places such as urban centers, shopping malls, and business districts. An industry insider said, “The shopping mall is chosen for the purpose of attracting traffic, opening up the traffic entrance, allowing more consumers to recognize new brands, experience new products, enjoy the supporting services of the mall, and increase the exposure of brands and products.”

User companies are difficult to do, and the battle for users is escalating

Behind the car brand's looting of territory in the business district, it is actually looting users.

The global management consulting company McKinsey released a report showing that Chinese consumers are increasingly calling for smart cars and are willing to pay a premium for novel features; among them, 80% of consumers include autopilot features as part of their purchase of the next car. Important considerations; at the same time, 70% of customers approve of the cloud upgrade OTA model, and more than 60% are willing to pay for it.

The potential user group is huge. How to find them accurately and stick to them is a challenge for automobile brands. Nowadays, almost all brands are emphasizing users, serving users, listening to users' voices, being user companies, etc., but there is a considerable difference in actual actions.

The recent changes in the price and configuration of ultra-krypton car products have caused a large number of users to complain: First, the price of the ultra-krypton 001 WE version has increased from 266,000 yuan to 284,000 yuan; in addition, users report that the rear privacy glass and co-pilot of the ultra-krypton 001 Ventilation, gradient canopy, blackening kit, etc. have all become optional, and the 800V charging that was advertised when it went on the market has also become 400V. For this reason, the extremely krypton side has responded many times and apologized, and it is difficult to calm the anger of users.

However, after the product was launched, Ford listened to users’ opinions and added the Mustang Mach-E long-range rear-drive SE version, priced at 282,000 yuan. The newly launched model has a battery life of 105 kilometers longer than the standard rear-drive version. The total maximum output power of the system is increased by 23 kilowatts. Moreover, Ford promised that users who pay a vehicle deposit before December 31, 2021 (inclusive), complete the formal signing of the car purchase contract and complete the car pickup within the notified time, can follow the 2021 national new energy vehicle price subsidy standard after the vehicle subsidy Price to buy.

According to industry insiders, although many brands are emphasizing the emphasis on users, they are still engineers thinking in terms of car-making concepts.

It’s hard to grab users, but it’s even harder to grab talents

is also human. The user base is huge, but talents are really scarce. Compared with robbing users, car companies have entered a white-hot stage of grabbing talents.

According to the "2021Q1 Mid-to-High-end Talent Market Spring Recruitment Data Report" released by Liepin, in the first quarter of this year, new energy vehicles are one of the fastest-growing fields in China, with a year-on-year increase of 103.54%.

In fact, Apple, Xiaomi, Didi, Baidu and other companies have stopped building cars and set up car teams. New energy vehicles are in short supply. In May of this year, Li Bin, the founder of Weilai Automobile, said in an interview, “Recently, there are too many people who have dug our truth. There is no way. We have to hide all the information of our colleagues.”

An employee of a car company who did not want to be named told reporters: “Now that the new brand is digging people, one is to pay a higher salary, and the other is to promise stock options, which will always be heart-warming.” According to statistics from BOSS, a new car manufacturer The average monthly salary offered by the forces was 15,367 yuan, an increase of 21.6% compared to the same period last year. For positions related to autonomous driving algorithms, the annual salary can reach more than one million.

According to BOSS direct employment data, in 2021, the number of new power companies such as Tesla, Weilai, Ideal, Xiaopeng, etc., will continue to increase the number of jobs and the interest of job seekers. Among them, the demand for positions in autonomous driving research and development, smart cockpit design, software engineer, sales, and user operations has increased by more than 1.8 times year-on-year.

New forces are eager for talents, and traditional car companies are not waiting to die. Great Wall Motors released its 2021 equity incentive plan in May. It plans to grant 39,7101,000 stock options to 8784 encouragement objects, and to no more than 586 encouragement objects. 43.184 million restricted stocks. Great Wall said that the encouragement of the launch of the program will help absorb and stabilize outstanding management talents and business backbones. Not only the Great Wall, but also the new forces, Weilai and Ideal, all adopt employee stock ownership schemes to retain talents.

Industry insiders said that there are only so many smart car talents, and high-end talents are jumping around in such a few leading car companies, and there are fewer and fewer opportunities for new car companies.

In the early stage of the development of smart electric vehicles, financing and qualifications became a problem for all employees. Cylin, Byton, and Future failed to survive the "lack of money" crisis. In the midfield battle, financing and qualifications have basically been resolved. Talents, business circles, and users have become the focus of the current stage of the competition. New top forces such as "Wei Xiaoli" have begun to take shape, and the newly entered Lantu, Zhiji, Jikrypton, Xiaomi, Didi, etc. will face the increasingly high rents in the business district, the increasingly scarce high-end talents, and the more intelligent users, the threshold and cost will be higher, and the probability of being eliminated will be higher. Big.